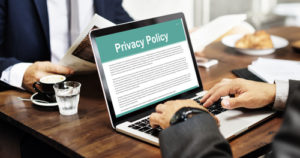 As US companies continue to spend time and effort complying and responding to all of the new privacy laws and regulations both in the United States and aboard (i.e. GDPR and California Consumer Privacy Act of 2018) companies cannot forget the basics.  If you represent something in your Privacy Policy it better be accurate, up to date, and not misleading!

On July 2, 2018, the Federal Trade Commission (FTC) issued a number of press releases and a proposed settlement with California-based employee training company ReadyTech Corporation.  In announcing the settlement, FTC Chairman Joe Simons said, “Today’s settlement demonstrates the FTC’s continuing commitment to vigorous enforcement of the Privacy Shield.”  According to the FTC, this is the 4th case enforcing the Privacy Shield and 47th case enforcing international privacy frameworks such as the Safe Harbor framework and the Asia Pacific Economic Cooperation Cross Border Privacy Rules. 12,915 complaints were reported in 2013 to the Department of Health and Human Services Office of Civil Rights (“OCR”) according to Illiana L. Peters, Senior Adviser for HIPAA Compliance and Enforcement.  Cozen O’Connor attended Ms. Peters’ presentation at the Safeguarding Health Information: Building Assurance through HIPAA Security conference on September 22-23, 2014.  The conference was hosted jointly by OCR and the National Institute of Standards and Technology (“NIST”).  Below are a few discussion points worth mentioning from the conference:

END_OF_DOCUMENT_TOKEN_TO_BE_REPLACED

CMS and ACOs: A Busy Summer and a Busier Fall It has been a busy summer so far for the Centers for Medicare & Medicaid Services (CMS) with respect to Accountable Care Organizations (ACOs), as the agency has proposed altering the quality reporting measures under the Medicare Shared Savings Program (“MSSP”) for 2015 and beyond.  Expect an even busier fall as other, potentially broader, proposed rule changes for ACOs are analyzed by the Office of Management and Budget (OMB) and both sets of proposals wind their way through the public comment process.

The proposed changes concerning quality reporting would revise and update the measures used to evaluate MSSP ACOs’ performance. Overall, the CMS says it would like to focus more on outcome-based measures (as opposed to process-based measures), reduce duplicative measures, and reflect current clinical practices without increasing ACO’s reporting burden.

More specifically, the CMS proposes to add 12 new measures and remove eight, which would increase the total number of quality measures from 33 to 37. The new measures relate to “avoidable” admissions for patients with multiple chronic conditions, heart failure, and diabetes; depression readmission; readmissions to skilled nursing facilities; patient discussion of prescription costs; and updated composite measures for diabetes and coronary artery disease.

The CMS would like to modify the scoring system to award bonus points toward shared savings to ACOs that make year-over-year improvements on individual measures. Moreover, the agency would like to modify its benchmarking methodology to use flat percentages to establish the benchmark for a measure when the national FSS data results in the 90th percentile being greater than or equal to 95 percent. And, finally, the CMS proposes several ways to align MSSP reporting requirements with other reporting programs, including Medicare’s Electronic Health Records Incentive Program and the Physician Quality Reporting System.

Fewer details are available about the next set of proposed rules changes, which were submitted to OMB on June 26 and will be printed in the Federal Register after review. It is expected that these regulations will include changes to the MSSP’s payment provisions. The proposed changes would apply to existing ACOs and approved ACO applicants starting January 1, 2016. As soon as the text of the rule becomes publicly available, the Health Law Informer will provide more information.

By all indications, these numbers will continue to grow as the US health system moves away from the fee-for-service model to pay for value models that reward quality and cost savings and require clinical coordination among different types of providers, in many cases providers who are unrelated other than through an ACO or other similar arrangement.  The seamless sharing of data, patient information and collaboration among large, medium and small physician practices, hospitals, post-acute providers, and even private companies like pharmacy chains is critical to the success of these organizations. END_OF_DOCUMENT_TOKEN_TO_BE_REPLACED